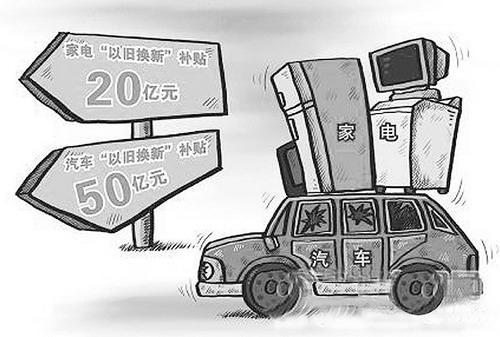 The Ministry of Commerce and the Ministry of Finance announced on the 26th of last month the "Automatic Trade-in Measures for Implementation (Draft for Soliciting Opinions)", clarifying the scope and standards of subsidies for replacement of vehicles, the procedures for the renewal of vehicles and the application, review and issuance of subsidies, and publicly soliciting requests. opinion.

The draft of the Opinions proposes that the range of the trade-in subsidies for vehicles from June 1st, 2009 to May 31st, 2010 shall be sold to the designated scrap vehicle recycling and dismantling enterprises established according to law, and redeem the purchase of new cars. : Older mini-vehicles less than eight years old, old and medium-sized passenger-carrying vehicles; old and light-duty trucks less than 12 years old; old medium-sized passenger cars less than 12 years old (excluding Taxi); various types of "yellow-marked vehicles" that are scrapped in advance, compared with those specified in the "Use Age Limit Table for Automobile Scraping Standards". In accordance with the aforesaid provisions, in case of scrapping old cars, â€œyellow-marked vehiclesâ€ and redemption of new ones in advance, the subsidy standard shall in principle not be higher than the amount of purchase tax for bicycles of the same type of vehicles. The draft of the consultations made it clear that the â€œyellow mark carâ€ will be scrapped in advance and the new car will be redeemed. If the new car already enjoys a vehicle purchase tax policy of halving the passenger car price of 1.6 liters or less, it will no longer enjoy the subsidy.

As one of the policies to boost the automobile industry, the implementation of the "trade-in replacement" implementation details was announced on schedule. The introduction of the new policy aims to inject a boost to the domestic auto market that has experienced weak growth in June. Although some experts predict that the New Deal can stimulate the sales of commercial vehicles, it seems that consumers and businesses are not optimistic about the response to this draft, and netizens generally believe that the policy is not attractive.

Experts believe that commercial vehicles benefit the most

According to estimates of experts from the China Automotive Technology and Research Center, after the implementation of the â€œnew-for-newâ€ automobile policy, this year it is expected to drive the sales of 300,000 commercial vehicles. According to the analysis, due to the full expansion of the scope of the subsidy to medium-, light-, micro-duty trucks and some medium-sized passenger vehicles, the introduction of this detailed rule will, to a certain extent, promote the weak commercial vehicle market.

Industry experts generally believe that the new measures introduced by the country will not only benefit the recovery of the domestic commercial vehicle market in the second half of the year, but also help accelerate the elimination of a large number of highly polluting yellow-standard vehicles. This is a continuation of the "combination boxing" of the adjustment and revitalization plan for the auto industry this year. According to the statistics of China Association of Automobile Manufacturers, between January and April of this year, domestic production and sales of automobile were 3,824,800 and 3,831,900, an increase of 6.40% and 9.43% respectively. However, the statistics show that the performance of passenger cars and commercial vehicles is very different: In the first 4 months, the production and sales of domestic passenger cars were 2,692,900 and 2,826,700, an increase of 9.75% and 15.09% respectively; however, the production and sales of commercial vehicles were 1,309,900. The number of vehicles and 100.52 million vehicles decreased by 1.46% and 3.86% year-on-year. In order to smoothly achieve the goal of producing and selling more than 10 million automobiles for the whole year, the development of the commercial vehicle market is indispensable.

It is worth noting that just less than a month ago, the Ministry of Finance and the Ministry of Commerce issued the announcement of the 2009 old car scrapping and updating subsidy. At that time, relevant departments estimated that the old car retirement subsidies for subsidy scheduled in 2009 will increase to 1 billion yuan. However, in the past few tens of days, this subsidy has increased to 5 billion yuan. This fully demonstrates the countryâ€™s determination to fully revitalize auto consumption. At the same time, it also fully shows the countryâ€™s powerful strength and flexible means in stimulating domestic demand â€œbackhand policyâ€.

Luo Lei, deputy secretary-general of the China Circulation Association, pointed out that after the introduction of the TMRS implementation rules, it will be beneficial to weak commercial vehicles, especially light trucks and medium-sized passenger vehicles will be the biggest beneficiaries; in accordance with the fine-tuned policies of the local government, consumption upgrade may be possible. Extend to the mid-size sedan market.

Consumers, businesses reflect the amount of subsidies is too low

Compared with commercial vehicles, passenger cars with higher market attention are not the focus of this subsidy. According to comments, the â€œYellow Markerâ€ is the only car model that meets the scope of â€œrenewalâ€, but the â€œYellow Labelâ€ car will be scrapped in advance and a new car will be redeemed. If the new car has enjoyed a vehicle purchase tax policy halving the 1.6 liters or less passenger vehicle purchase. Will no longer enjoy subsidies.

Some dealers believe that because the redemption subsidies cannot be repeated with other preferential policies, consumers often choose the easy way. When interviewed by reporters in the second-hand car market in Guangzhou, it was found that most car owners often choose to sell cars instead of scrapping them, as opposed to a subsidy of up to RMB 6,000. An owner of the vehicle preparing to change the car told reporters that in the used car market, even the Jetta, which he intended to sell in 1998, could sell at least 20,000 yuan. If he takes it for retirement, it is obviously not worthwhile.

According to the person in charge of the used-car trading market, in the used-car trading market, the number of models trading at less than RMB 6,000 is very small, even if it is a 10-year old Santana, Jetta, or Fukang, the transaction price is at least 2 About 10,000 yuan, while the Accord, Camry and other old models are still priced between 30,000 -4 million. Relatively speaking, the old models of Alto, Geely, Xiali, and small-sized vans with a displacement of 1.6 liters and over 10 years old are relatively large. Since the value of these models is not high, many models are valued at only RMB 3,000 to RMB 4,000. In addition, there will be subsidies of 500-700 yuan per ton for scrapping, and it is expected that there will be some encouragement for trade-in replacement. The manager of a used-car dealership told the reporter that since the implementation of the â€œnew-for-newâ€ subsidy policy, there has not been a surge in trading volume. He predicts that in the face of the coming â€œoff seasonâ€, there will be no significant increase in the prices of used cars.

In fact, the Central Governmentâ€™s â€œrenewal of tradeâ€ has been actively responded to by the local government. Shanghai and Henan Province have rapidly adopted corresponding policies, and the amount of subsidy even exceeds the national subsidy standard. However, consumer response to the policy is still not very strong. A certain 4S shop sales staff of Beijing Hyundai told the reporter: â€œA lot of consumers have recently consulted the 4S shop for the redemption procedure. However, there are many people who have consulted, and few people really submit a subsidy application.â€

â— How does this time involve scrapping and recycling of official vehicles? To save energy, the government must take the lead.

â— Does the country have no policy on 15-30 years old cars? It is useless to verbally scream for environmental protection. Actual action is required!

â— The requirements are too harsh, subsidies are too small, and many old cars have incomplete procedures. A good old car to the second-hand market is also several times more expensive than the subsidy.

â— Although the â€œreplacement of old for new onesâ€ expands the scope to medium-sized cards, micro-cards, and passenger cars, the subsidy of up to 6,000 yuan is obviously insignificant relative to the total price of a new car. If it can continue to be used, the owner will not be able to lose thousands of dollars. Subsidies for buying a new car.

â— I feel that the role of â€œrenewal of oldâ€ in expanding domestic demand may reflect more in the replacement of home appliances. Automobiles are less obvious in this respect.

â— The 6,000-yuan subsidy seems to be a bit appealing, but you need to scrap old cars to enjoy this offer, but owners often choose to sell instead of scrapping. My Caramel can sell 20,000 yuan now. You said I would scrap the car for a subsidy of 6,000 yuan?

China Heavy Truck Howo A7 Cabin is designed by China and Italy Group together. The rearview mirror is designed to be consistent with the overall cab style. Smooth lines, with a small turn signal rearview mirror to a certain extent, you make up the headlights turn the lights too small defects. If at night, combined with wheeled head on the turn signal is also a good scenery! Waist and side windshield fusion is more smooth, not only reflects the power and yet aesthetic. In front of the hood in the integration of similar Ford passenger car X-type lines, it is full of modern, while into the history of the network design people imagination. The overall style is relatively moderate, powerful, beautiful, and simple! HOWO-A7 features economical, comfortable, safe and reliable.